Around 3 a.m. one day this past spring, a math teacher at Mott Haven Academy was stirred awake by the buzz of a text message. It was from a student, who wrote that his mother had just died from the coronavirus.

The Bronx charter school, still in the process of switching to remote learning, sprang into action. The child’s teachers huddled to plan both for his grieving process and how to soothe his classmates, and the school helped the family cover funeral costs.

Mott Haven Academy was unusually well prepared to confront a death in the community — and to help its students weather the coronavirus — because it was built to handle crises. Mott Haven, which has an elementary and middle school, reserves most of its roughly 460 seats for students in the child welfare system and uses an array of social services to offer them much more than academics.

Now, schools around the nation that serve vulnerable children may have little choice but to adopt the unconventional measures that those like Mott Haven and Broome Street Academy, a charter high school in Manhattan that serves about 300 similarly at-risk students, have used since the pandemic hit.

Doctors affiliated with the two New York schools mailed students antidepressants or birth control pills, teachers added families who could no longer pay bills to their personal cellphone plans, and administrators gave cash grants to parents who had lost jobs.

All of this was in addition to ensuring schoolwork was adapted for remote learning, underscoring how the challenges facing schools in September include more than just preparing English and math lessons, and instead encompass every facet of a student’s life.

Millions of students in large cities and suburban districts will not physically return to classrooms this fall, and New York’s 1.1 million public school students will likely attend school in person only a few days a week.

Black, Hispanic and low-income children who have endured both devastating health outcomes and serious economic devastation from the virus need creative solutions when they cannot be in school, said Bill Baccaglini, chief executive of the New York Foundling, the social service agency that founded Mott Haven.

“I think the entire system has missed something if they don’t rethink what the fall semester looks like,” he said.

Mott Haven’s ties to the Foundling and Broome Street’s to the Door, based in SoHo, give both schools connections to large, nonprofit social service agencies that focus on at-risk children.

The two schools offer a slew of services for tens of thousands of children and families each year, including physical and mental health care, legal assistance and help finding housing.

Most public schools do not have those resources or the ability to add new services, especially with the significant budget cuts prompted by the coronavirus crisis.

But schools that serve predominantly low-income children, long tasked with providing nonacademic help, will have little choice but to redouble that work whenever a profoundly traumatized class of students reports back to school.

Melissa Silberman, the principal of Broome Street, started thinking about how to protect her students and their families weeks before schools were shutter 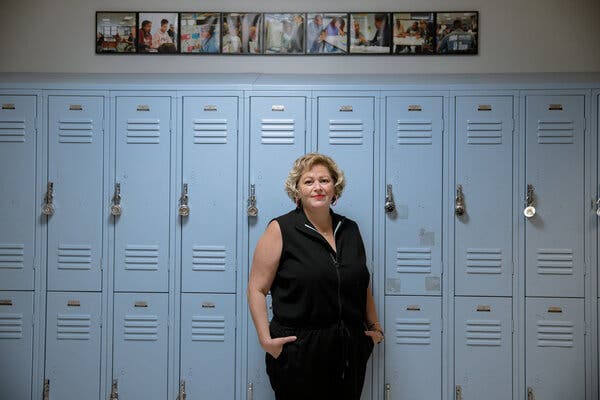 “We have young people who have a high degree of trauma; even the very act of shutting abruptly is traumatic for them since they see Broome Street as a home,” she said. Many of Broome Street’s students came from some of the worst-performing middle schools in the city.

In March, teachers at the school showed students how to log on to their online learning portal, had them save their social workers’ cellphone numbers and created an email hotline for questions from families. Broome Street distributed over 100 laptops for the many students who did not have computers at home.

“Because we are a school built around a high degree of intervention, we were able to pivot in a way that has just been shocking,” Ms. Silberman said.

Shortly after protests against police brutality erupted in New York City, a student reached out to the guidance staff, asking for an emergency appointment. The teenager had recently lost a family member to the coronavirus and had just left a protest where her brother was pepper-sprayed by the police.

The school was able to schedule a remote therapy session quickly because it has five social workers for its roughly 350 students.

In contrast, in 2018, the city’s traditional public schools had an average of one guidance counselor for roughly every 380 students, and one social worker for every 716 students, according to a city Department of Education report.

About a third of the students at Broome Street receive weekly counseling — including a transgender teenager in a group home who has to use a pay phone in a hallway for therapy sessions during the pandemic. Every student at the school received a weekly wellness check-in via email in the spring.

Aniyah Stoves, a recent graduate, relied on those meetings. Her stress mounted after she lost a job she loved at the Guggenheim Museum when the city shut down, and younger siblings running around the house made it hard to focus on schoolwork. In the spring, she said, “I got overwhelmed and felt like I was bearing too much.”

Since 2014, Mayor Bill de Blasio has directed over 100 low-income schools to add more social services. That started when the city’s economy was booming, but he cut about $9 million for those so-called community schools in the latest city budget. That move, activists say, shows just how unprepared the city is to support its neediest children.

“You have this massive number of kids who will fall through the cracks because the city didn’t coordinate services for them,” said Eric Weingartner, the chief executive of the Door.

Mr. Weingartner said Broome Street was able to prevent calamity for its students and families in the spring because it offered such a variety of services.

“Whatever crisis kids are going through,” he said, “it’s never just one thing.”